Vegans are right to hate me. 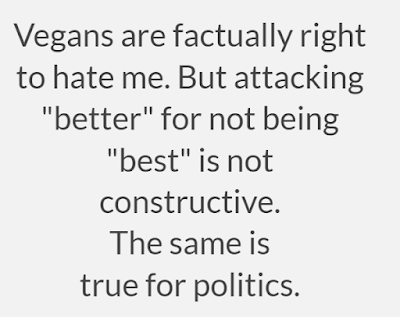 Thousands of vegans have attacked me (examples in the comments here). I was fired from multiple jobs. I was banned from an animal rights conference after having been elected to their "hall of fame."

And you know what? They were factually correct. I don't promote veganism. I ignore fish, dairy, animal testing, fur, etc. I advocate working with big companies, including meat companies.

So I understand why so many vegans hate me and what I advocate.

But we have limited time and resources. What we choose to do is a statement of what we value. There is a lot of unnecessary and preventable cruelty in the world. Why spend your time attacking me?

You can cite all the facts about how right veganism is, and document how wrong I am, but what good does that do in the real world? How is that the best use of your time? How will it help bend the arc of history toward justice? How will it change even one mind?

The same is exactly true for politics. If we spend our limited time attacking the better of our real-world choices, we are hurting our best chance for any progress. We are also actively enabling truly cruel and terrible and hate-filled people.

This really matters. Hundreds of thousands of people died because people slagged on Al Gore and voted for Ralph Nader. Over a hundred thousand people have died unnecessarily so far from Covid in the United States because people slagged on Hillary Clinton and voted for Jill Stein. (And, of course, the "Green" party in the United States completely undermined any chance the U.S. would do anything about climate change in a timely fashion.)

Personally, Obamacare literally saved my life. Anyone who slags on Biden, Harris, or other Democrats during an election is actively increasing the likelihood that more people (like me) will die unnecessarily.

Pragmatic realists are what move history forward. It does not help to attack better for failing to be best. Exposing evil and asking for realistic change makes things better. 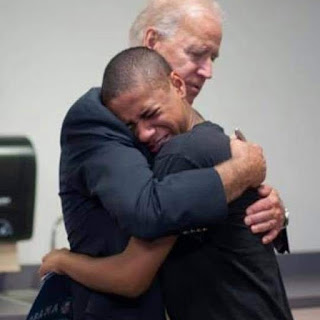 This article makes perfect sense and anyone involved in any sort of job or organisation in a planning / leadership role will know that it rings true. Things don't change by days, but years, no matter what we think is best.

Perhaps we should require something of our candidates in exchange for our support. Of the 100 million people who do not vote, perhaps offering something might move them to vote and then we could stop blaming the small number of people who, as is their right, supported third party candidates.