An Excellent (but NSFW) Summary

After reading this, a friend summarizes their feelings:

I mean, fuck, forget abortion, forget planned parenthood, forget marriage, they endorsed conversion therapy for MINORS, which not only doesn't work and has been denounced by every legitimate medical institution but we KNOW it's more likely to push queer people and ESPECIALLY kids to suicide, which we already have too much of. They support bathroom bills that put trans people at greater risk of violence and death, as if we didn't have enough already.

I fucking hate these fuckers.

But that doesn't even start on donald fucking drumpf. 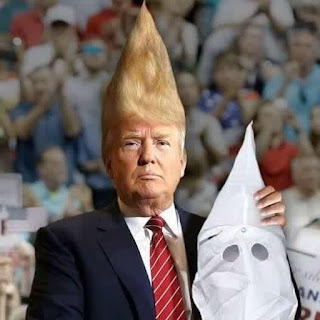 Like jesus fucking christ, they nominated a REALITY TV STAR.

How the FUCK is this real life?

A fucking REALITY TV STAR who not only has a history of racism, misogyny, fraud, and generally being a POS, but continues to be a POS and can apparently say whatever he wants, up to and including endorsing dictators and encouraging them to interfere in our elections.

And yet the media somehow still has the fucking GALL to frame him with this false equivalency to the fucking former secretary of state, former senator, former incredibly politically active first lady.

I am fucking tired of hearing 'crooked Hillary' from people who won't call donald drumpf what he is. everyone who used that nickname should be required to call donald drumpf a racist, misogynistic, Islamaphobic, incompetent, fraudulent, lying x71 POS before they even get to saying his name.

Not only have they NOMINATED the reality tv star, it's somehow a contest between him and a frankly unbelievably qualified candidate.

I am tired of people telling Hillary Clinton to smile and making jokes about her pantsuits and saying how shrill she is and all this fucking bullshit. I am just so fucking tired.

PS: I have gotten used to the fact that there are people who place zero value on my life, or even want me dead (thanks for that reminder, Orlando). I accept that some of these people vote and hold political power. I accept this shitty fact of life even though I never intend to stop being angry about it. But the people who claim to be liberals while still being unwilling to give up on their racism and misogyny, and/or denying that their rampant racism and misogyny exist, who attack the person who will protect me and mine, who thus help the evil party and their fucking insane nominee ... those "liberals" drive me absolutely up the fucking wall.