Learning from History to Maximize Our Impact

I've given this talk twice this year. Yesterday, it went very well. The other time – at the Scottsdale VeganFest in March – was the worst reception I’ve ever gotten. Even worse – much worse – than speaking at the Future Farmers of America national convention, when hundreds and hundreds of future farmers chanted “Eat More Meat!”


I’m going to tell you a bit about how I got here, covering some of the lessons I’ve learned along the way.

Note: I did not start out as an animal lover. I grew up in a small town in rural Ohio and went to twelve years of Catholic school. I went fishing every summer and I loved meat. Whenever it was my birthday, I chose Ponderosa Steakhouse. When I started college at the University of Cincinnati in 1986, my family and I made plans to go to the fanciest restaurant in town when I graduated.

It didn’t quite work out that way.

My roommate that year was an older transfer student. For those who don’t know me, I’m 6’ 2”, but Fred was an even bigger guy – 2 or 3 inches taller, probably 70 pounds heavier. Built like a linebacker.

And he was a vegetarian. Fred told me how animals are mistreated on factory farms. Eventually, his appeals to logic and justice convinced me and I stopped eating meat. But I’ll be honest – in a dorm back in 1986, I wasn’t too happy. I was living on Capt’n Crunch and government-cheese sandwiches. I thought I was going to die of malnutrition.

Like a lot of people, I found my fellow mammals more sympathetic than other animals. So instead of going back to eating beef or pork, I ate chickens instead. This is in keeping with a general trend, which is lesson number two: in the United States, consumption of red meat has stayed relatively flat or declined in my lifetime. But consumption of chicken has skyrocketed – increasing 500% in just a few decades. 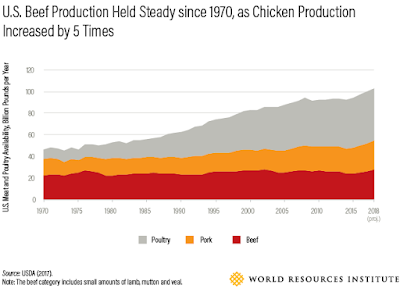 The next year, I was living on my own. One day, I was staring into the mirror, and a thought just came to me: “How can I consider myself a good person if I continue to pay others to kill animals so I can eat them?” At that very moment – and this is 100% true – the wall started shaking with a loud “BAM BAM BAM!!”

OK, it was someone in the next apartment hammering a nail into our common wall. But it was very shocking. At the time, it felt like a sign. I’ve never eaten meat since. As I learned more, I moved to Amish cheese and free-range eggs, before eventually giving them up as well.

At the time, I was studying to be an aerospace engineer. I had always loved planes and space. I talked about Carl Sagan so much my teachers referred to him as “Uncle Carl.”

But the more I learned about factory farming, the more I realized that I didn’t want to design jet engines or spacecraft. I wanted to do something that would have an impact down here on earth. I won a Global Change Fellowship from the Department of Energy and went to grad school at the University of Illinois with the intention of studying Environmental Engineering.

There I joined Students for Animal Rights. After my first semester, everyone else in the group graduated. I had to decide whether to let the group fold, or take it over and build it up again.

Now I’ll be honest with you – I hated the idea of trying to lead a group. I’m a serious introvert, and the idea of speaking before a crowd literally made me sick to my stomach. But luckily for me, I didn’t give into the fear, because it was through that organization I met and married Anne in 1992.

So lesson number three: if you face your fears, you will meet your soulmate! 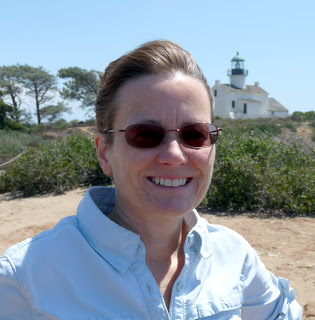 Of course, your mileage may vary on that one.

Anne got a job as a professor at Carnegie Mellon University in Pittsburgh, PA, and we moved there in 1993. The next July, EK was born. There are currently a lot of websites and resources for an entirely plant-powered pregnancy, but there weren’t so many back then. There were exactly zero. Lesson four: you don’t have to eat meat, eggs, or dairy, even in pregnancy.

And you don’t need them growing up. EK earned four varsity letters in high school track and four in cross country. EK ran in the state championships in everything from the 4x800 and two mile to the 5k finals for cross country. EK was also a state champion in Science Olympiad and a National Merit Scholar. They repeated all this at Pomona College, which at the time Fortune Magazine ranked the #1 school in the country. EK earned academic honors and was only the 14th in Pomona’s history to earn four cross country and four track letters on the women’s teams.

But I’ve gotten ahead of myself. Back in the 90s, I was working on climate change. Remember, this was before climate change was cool – it was just me and Al Gore. However, more and more I found myself interested in activism, not academics. Anne and I co-founded a nonprofit with the goal of trying to convince people not to eat meat. Since Anne had the job, she underwrote the organization for a number of years.

At the time, I was quite ideological (to put it mildly). I worried about definitions and philosophy and “consistency.” I was hardcore, more interested in the purity of my message than in the real-world consequences of my actions.

This disease fundamentally changed how I looked at the world. Words and definitions and purity no longer seemed important. What matters is suffering, and my goal became reducing suffering as much as possible.

I tried to shift my advocacy to something more rooted in the real world. I no longer wanted to just promote my personal philosophy. I wanted to reduce suffering as much as possible, however I could. So where are we …? Oh yeah: lucky lesson seven: please focus on reducing suffering in the real world.

Let me pause here a second, because I believe it is very important to understand that people are eating more animals than ever before. This can be hard to believe, because it goes against the “we’re winning” narrative many groups promote.

Lessons nine and ten: People don’t act the way they say they will. It is a hard lesson to learn. It is easy to get caught up in the “good news” on our social media feeds. But reality is harsh.

So if you want to reduce as much suffering as possible, what do you do?

1. It takes over 200 chickens to make the same number of meals as one steer.

2. In many regards, chickens are the most abused animals. The situation is so brutal that animal science professor Dr. John Webster noted that industrial chicken production is, “in both magnitude and severity, the single most severe, systematic example of man’s inhumanity to another sentient animal.”

3. This year, the average person in the United States will eat about 26 animals from factory farms. About 25 of those are birds.

4. Just about every single argument for vegetarianism – health, environment, animals – is taken by the general public to be an argument against eating cows and pigs and for eating more chickens.


With these facts, Anne, longtime friend and activist Joe Espinosa, and I founded the group One Step for Animals in 2014. Our message is simple: Please don’t eat chickens. You can find out more at OneStepForAnimals.org.

One Step seeks to be rational and adjust to the facts in the real world. Again, those facts aren’t pretty. If you look around the world, meat consumption is soaring almost everywhere. The statistics certainly seem to indicate that the vast majority of people will buy as much meat as they can afford, regardless of any argument otherwise.

This is depressing, I’ll grant you that. But again, I believe that we should face harsh facts. We don’t help animals by living in a fantasy world.

In addition to adjusting our advocacy message on the demand side, another possible reaction is: If you can’t beat ‘em, join ‘em. Give people what they want, but in a way that doesn’t cause animals to suffer. If people are going to eat meat, let’s change the supply.

Let’s give people plant-based meat that has the same flavor, smell, and mouthfeel. Let’s grow animal cells in a clean cultivator rather than in an actual animal: let’s give people clean meat.

This is a trillion-dollar industry, and we will be transforming it from inefficient filthy factory farms to plant-based and clean meat.

This isn’t just an old activist’s wishful thinking. Visionaries like Bill Gates, Richard Branson, guys from Google, and the richest man in Asia are all investing in these companies.

If the meat industry is buying in, you know this isn’t just a pipedream. It is the future. And by facing facts and working in the real world, we can actually change the world. For real.