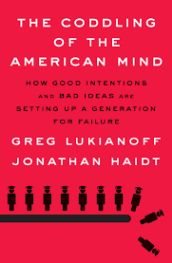 Where Lukianoff and Haidt lose me is their argument against looking at outcomes when working for social justice. Their example is that under Title IX, the University of Virginia made women's rowing a varsity sport to help offset the huge (men's) football program. Their argument is that if more males are interested in sport than females, why shouldn't there be more (school-sponsored) athletic opportunities for the boys?

This, of course, brings up Sam Harris' egomania. He paints himself and his center-right straight male friends as the only ones willing to "speak the truth." One of his "only I'm brave enough to say" claims (in addition to his bewildering ongoing insistence to talk about race and IQ) is that James Damore was "right" in his Google memo that women just don't like working with computers, so tech firms should stop trying to hire women.

I think the evidence actually does not support Damore and Harris - listen to this for an explanation (video version), and see this for proof that it doesn't have to be this way.

But regardless, can he really say that no girl could ever have an interest in coding? Here's my question to Sam: would you really want your daughters to have to work with someone with Damore's attitude?

What continues to amaze me is that straight white males spend their time defending Charles Murray or complaining that male rowers at the University of Virginia aren't varsity athletes. Do they really think these are the main injustices that need to be addressed?

More importantly, can they not see that promoting the idea of "natural" and "inherent" differences between men and women or between races supports active discrimination (you don't have to watch many videos of Nazis and white supremacists before you hear one of them pointing to Charles Murray's book The Bell Curve as "scientific proof" of racist views). Questioning underlying societal assumptions, recognizing the power of nurture and stereotypes, and working for more equality in outcomes is better than supporting the straight-white-men in control status quo.