My Review of / Response to Bryan Caplan's "Don't Be a Feminist"

Professional provocateur Bryan Caplan has put up excerpts of the title essay from his new book, Don't Be a Feminist. It is written as a letter to his daughter.

>And since I am your father, you know I’m not evil.


WTF? Most evil people are fathers. Is this Bryan's level of logic / persuasion? "Defer to me because I impregnated your mother."

>To start, what is “feminism”?  Many casually define it as “the view that men and women should be treated equally” or even “the radical notion that women are people.”  However, virtually all non-feminists in the United States believe exactly the same thing.  In this careful 2016 survey, for example, only 33% of men said they were feminists, yet 94% of men agreed that “men and women should be social, political, and economic equals.”

Just because people say something doesn't mean it is true. Most people say they aren't racist, but tons of people are.

One example of reality vs claims: My wife, a brilliant and award-winning teacher, was told by several men (not at her university) that she only got the job at Carnegie Mellon because she is a woman. Given that they said this to her face, just imagine how many men thought that.

And I'm sure every one of those sexist men says they agree “men and women should be social, political, and economic equals.” But in reality, they resent women who succeed.

This is what women face today.

Within my lifetime,  women in the US were NOT able to:

This discrimination and oppression were part of the very structure of our society just a short while ago. For nearly all of human history, men and women were not social, political, and economic equals. The leading conservative jurist on our current Supreme Court wants to go back to at least some of this.

But no. The real problem, in Bryan's eyes, is that some women and men want to actually improve our society, rather than just pay lip service. For Bryan, lip service is enough. Feminism has gone too far because some women dared to be mean to him on Twitter.

"Dear daughter, don't you dare be uppity to us wise professors!"

These "loud" feminists will continue to be opposed by deeply angry, resentful men who read Bryan as an ally in their hatred of "uppity" women.

As represented in the excerpts, this "Don't Be a Feminist" essay is such whiny, self-pitying, and self-righteous garbage it literally pains me. Moreso, it is shockingly blind to the realities in our world -- the facts faced by his kid and my kid.

Here is just one example of many. It shows the structural reasons women aren't in computer science. It isn't, as Bryan would have us believe, simply because men are manly mathletes. More. (More, by center-right Tyler Cowen.)

This is the world his daughter lives in. This is why we need feminism.

Defer to the wise white man who knows better? 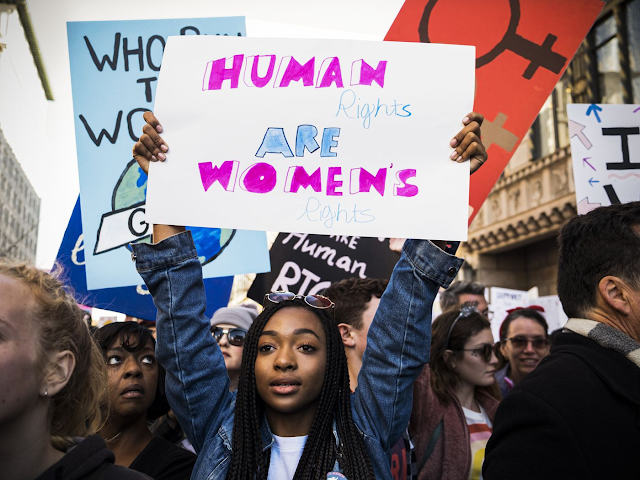 Matt, I come to your blog by way of the link you left at the bottom of Caplan's most recent post.

I think the difference between you and Bryan is clouded by different uses of the word "feminism." You seem to be claiming under that umbrella any opposition or action against differential treatment of women in the past several decades (or more). From there, you conclude that feminism is good and should be supported. By contrast, I think (although I'm not sure, having not read the book but just his blog) that he is using the term to refer to the activities and ideological committments of people who currently describe themselves as feminists, as opposed to those of people who do not.

I think your sense of the word "feminism" has merit, but I think you should grant that his may as well. There's no reason one can't laud the past accomplishments of a movement while being opposed to its current activities.

Hi Joel,
Thanks so very much for your thoughtful comment.
I agree that there are different definitions at work here. Bryan takes the most extreme and mean aspects of feminism and makes that his strawman against everyone who uses the word "feminism." He doesn't acknowledge that his daughter will grow up in a patriarchy where women face certain barriers and prejudices.
I feel bad for his daughter.
Thanks again, and take care.

This Atlantic article contains other examples of what women experience in the workforce and their careers. I don't really know yet what to think of Bryan's attempt at redefining Feminism as a term, but it's clear Matt has a point that women still face issues.

See, this is the kind of "I'm a poor whiney white man who can't even put my name to my complaints" bullshit that just drives me crazy. Just like "we had a (half) black president, so racism isn't a thing, except for whites being discriminated against."

Of course you doubt my wife's qualifications. THAT IS FUCKING SEXISM! Can't you fucking see that? YOU SEE MY WIFE AS LESS THAN. UNWORTHY.

I can give you her fucking qualifications (won the college's top teaching award, president of the two national organizations, full teaching professor first year eligible) but it doesn't matter. All you see is an unworthy woman. Just like every other woman is unworthy because a school that had been nearly all male enacted policies to get past our inherent biases for others like us.

Of all the things listed, you pick on health insurance, as though women get pregnant all on their own. And all the rest are "solved." The country was made by men for men and laws were enacted to protect men. But a few decades ago, a few of those laws were undone. So everything is now "solved." Except for discrimination against whiney little bitches like yourself.

Your lack of empathy, your self-absorption, it is just astounding. You make me embarrassed to be a man, except that I'll put my name on my comments.

Thanks Henri. (Sorry my last comment came right under yours. It isn't for yours.)
Here is more:
https://www.mattball.org/2019/01/equality.html

Do you doubt that affirmative action programs can create a veil of perception that a beneficiary is qualified? Or that women, particularly Caucasian women, have been significant beneficiaries in the past few decades? Because both of those could tilt the needle in favor of women and others who would qualify. That doesn’t mean that your wife wouldn’t have succeeded anyway, just that many others wouldn’t have.

As for the virtues of putting one’s name on one’s comments, it takes no virtue to publish opinions slavishly aligned with the Current Thing, in this case feminism.

Lastly, a major premise of your original post is flawed. You claim that someone can deny being racist while still being racist. That part is certainly possible. However, you give no weight to the fact that in order for racism (or sexism) to be that unpopular in terms of public avowal, “systemic” forms of these bigotries cannot be significant or prevalent problems. Furthermore, you give all the benefit of the doubt that self-proclaimed feminists only want equality, while denying that benefit of the doubt to those who claim to want equality but reject the label of feminism. Why is this?

Yeesh, such dislike of women.

For centuries, the system was run by straight white men like yourself. Even progressive men favored other men - it is just human nature.

And this denigration of women was institutionalized, as this post documents. Within my lifetime - not some ancient history.

How to get out of that cycle? And who decides when things have been successful? It would seem that you, a straight white dude, think that you should decide how to break that cycle, and that you can decide when things are good enough for women.

Is it really so hard for you to recognize how psychologically absurd that is?

Look, I'm sorry people calling themselves "feminists" were mean to Bryan's pal online. As I note in Losing My Religions, loads of vegans have worked to make my life miserable. But that doesn't mean we should dismiss the treatment of animals on factory farms.

Although you might point to polls that say nearly everyone opposes cruelty to animals, and thus the problem is solved. But the system is still causing as much suffering as ever. What people say is irrelevant. It is simply cheap to be a member of the historically ruling class and point to what people say in order to whine about male victimhood and attack those working to actually make society more equal.