I Guess It Really Doesn't Go Without Saying


I figured I didn't need to explicitly point this out, but the deluge of attacks indicate that many people either aren't actually watching the Vox Voice video, or they're determined to prove Paul Simon correct ("Man sees what he wants to see, and disregards the rest.").

So I'll spell it out explicitly: If you actually watch and pay attention to the video, I never say anyone should actually eat beef. (Also note that the few minutes I actually speak was drawn from a one-hour wide-ranging interview.)

Also, I never say vegans are Hezbollah or like a terrorist group; I say that given how some vegans act, it isn't surprising that someone would compare vegans to Hezbollah. And it isn't just Bourdain. Research by the University of Arizona’s Eller School of Business found that the general public has a very negative opinion of vegans. Paul Shapiro sent me this recent survey, which found that vegans are viewed more negatively than atheists, immigrants, homosexuals, and asexuals. The only group viewed more negatively than vegans were drug addicts. I honestly don't know how we can be maximally effective in helping animals if we don’t recognize this, admit it to ourselves, and begin trying to fix it.

At first, I was disappointed with the headline Vox put on the interview. However, given that the video has been trending on YouTube all weekend, and is closing in on a million views,* I have to admit that Vox knew what they were doing in terms of capturing eyeballs. Clearly, there is a hunger among people to do something to help animals that seems, to them, achievable and sustainable. 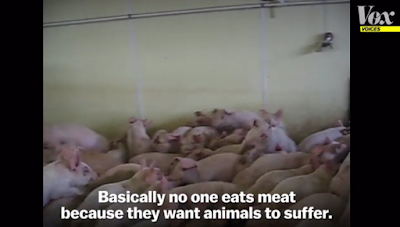 To me, the most important goal is that we find the message that reaches and inspires new people, rather than what gets us more "Likes" on our Facebook feed. Given that this year, the average American will eat more animals and cause more suffering than ever before, I'll take a million new people learning about how to help animals over being praised and "liked" by the vegan police every day.