All it takes for evil to triumph....

Let’s be totally honest.One of our political parties excuses, defends, and even celebrates the police every time an unarmed minority is killed.

This is not surprising, given that this is the party of white supremacists, given that this is their nominee, and given that their chosen selling point is convincing Caucasians that all brown people are out to steal from or even kill them. This party has created an atmosphere so poisonous (and highly armed) that it would be irrational for black people not to live in fear (1, 2).

One party doesn’t just dislike LGBT individuals, but actively fosters hatred and violence. As Michelangelo Signorile writes in It’s Not Over, 29 states have no statewide ban on discrimination on the basis of sexual orientation in public accommodations, housing, employment, credit, or lending. Some states have actual pro-discrimination laws on their books. Signorile lists a just handful examples of discrimination and violence from the torrent of similar incidents in just the past few years – discrimination that is promoted and violence that is tacitly encouraged by one of our political parties. (Dan Savage's take is spot on, too.)
One of our political parties nominated a candidate who has said he doesn’t want his wife working, because she should be making dinner. But this is minor compared to the broader attitude of this party, which – again, let’s be totally honest – wants women to serve men, and doesn’t want women to control their either their own bodies or their own lives. Of course, I get it. I’m a relatively well-off straight white male. It is easy for me to want to “vote my conscience.” I don’t have to worry about being harassed, discriminated against, or even murdered because of the color of my skin or my sexual orientation. Plenty of people are more concerned with the perceived purity of their vote than the actual lives of their fellow citizens. These people helped put George W Bush in the White House, leading to Alito and Roberts on the Supreme Court, killing over a half million people, destabilizing the middle east and displacing countless refugees, and ending our long national nightmare of peace and prosperity. History is clear: we need to look beyond our ego and realize the consequences of our vote and our words. The other side doesn’t care about purity or conscience; they care about power and control. Given the real world stakes for real people, it is unconscionable to vote for the “perfect” rather than the possible. 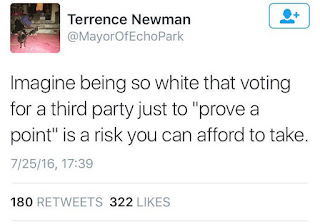 Of course, the Democratic Party in the US is far from perfect. There are frustrating and foolish Democrats. But an election can’t be about personality or popularity. This has to be about policies.And let’s be honest. The modern Republicans are not some theoretical “greater of two evils” (1, 2). Their actual stated policies and goals show they are institutional evil. And if we are not doing everything in our power to defeat them, then we, too, are de facto evil.