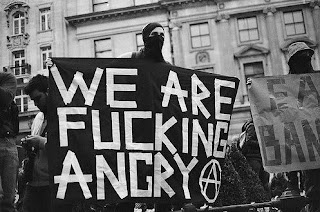 Case B: Now imagine that you want to change the general public's behavior, but currently, fewer than 1% of your target audience shares your views.

Do you see a difference in these two situations? Would we really pursue the same tactics in both situations?

This is so drop-dead obvious to me that I am utterly flabbergasted when people point to something that seems to have worked in Case A as if it has any applicability to Case B, let alone claiming that it justifies absurdly destructive actions.

Seriously – naive, or malicious? It sure feels like the latter.

How many attendees at a vegan event would be convinced to eat meat if protesters arrived, disrupted the opening meeting, and then started chanting that being vegan was wrong?

I can't help but wonder what the vegans' reactions would be. Maybe something like the audience at the recent Whole Food meeting that DXE interrupted?
“The reaction of the audience was generally unsympathetic, with several audience members booing or yelling back at the protesters.”
http://www.stanforddaily.com/2016/02/24/protesters-disrupt-meat-eating-debate/

Of course, that is, if you want be effective. If you don’t want to or care about being effective, then it doesn’t matter what you do. Just don’t get angry or be upset when you see things you don’t like in this world not changing.

Regardless of the motivation, the effect is the same.