A Note re: Global Warming to My New Fans from Vox

Thanks to everyone who has watched and shared my Vox Voice interview. 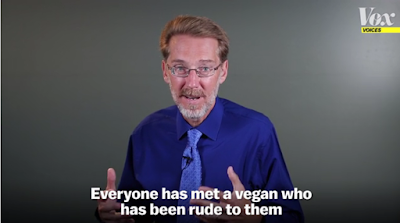 Just a few notes to the people who have provided ... unhappy ... feedback:

I didn't choose the headline, and nowhere did I actively encourage people to "eat beef." For those who actually watch the video (as opposed to attacking me based on Vox's headline), the facts actually presented are about relative animal suffering, and stand on their own. There is absolutely no doubt that eating cows causes far far less suffering than eating chickens.

For those who comment on global warming, please note several things:
It is beyond reasoning to contend that some abstract (and unrelated) future event allows us to partake in active cruelty (as I write about more here).

One question not used in the final Vox video (only a few minutes of an hour-long interview made the final cut) was: Why should anyone care about animals when humans are suffering? My answer is that supporting the torment of chickens doesn't help anyone, human or non-human. No matter what we care about, we can significantly and profoundly reduce the amount of cruelty and misery by simply choosing not to each chickens.

If we care at all about reducing real and brutal suffering, we should honestly consider the facts and act accordingly.

One kilogram of cow meat produces 35kg of CO2e compared with 5kg for chicken meat. Each broiler chicken produces some 1.5kg of meat and lives in a farm for ~2 months. So the trade-off is that sparing one year of chicken-life in a factory farm - and twelve chicken deaths - by instead eating cow meat instead will lead to an extra ~0.3 tonnes of CO2e.

The World Health Organisation speculates that 5,000 tonnes of CO2e will cause the loss of one year of healthy life.

If this number is to be believed, avoiding the loss of *1* year of healthy human life from climate change would come at the cost of *17,000* years of chickens living in factory farms (100,000 chicken lives in total).

Even if climate change is significantly worse than that number suggests, that seems like an enormous amount of animal misery.

Keep in mind, like me, you can always just eat neither.

Also keep in mind how valuable it is to do these calculations so you can get these things approximately correct.


*Note: I'm not saying that all global methane emissions, taken as a whole, have no impact on climate (see my background). I'm simply noting that the minuscule amount methane caused by one burger or one cow will not have any impact. It is absolutely unfathomable to me that anyone would argue that we should actively torture a sentient being to avoid an additional handful of methane molecules in the atmosphere.