Lewis passes along this interesting study, which suggests that the phrase "factory farm" affects consumers' experience with meat, and how much they eat:


Par­tic­i­pants were willing to pay 22 per­cent less for a six-ounce package of the fac­tory farmed jerky com­pared to the humanely farmed jerky and con­sumed 8 per­cent less as well, showing, the researchers wrote, “that implicit con­sump­tion behavior was also influ­enced by beliefs.” 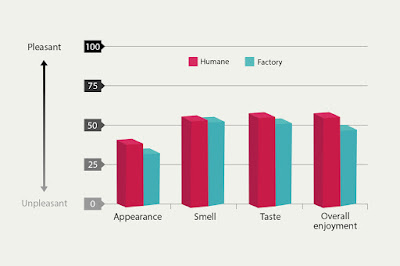 On the other hand, Josh passes along this article by James McWilliams pointing out that price is a far more important driver in decisions than ethics (perhaps a companion piece to this).


[E]thical hand wringing over the morality of eating meat may be more sound and fury than Sturm and Drang.

One possible take-away from these articles is that we should play to what Americans already believe, and harp on "factory farmed" instead of spending so much time and energy going after "humane" (based on my Facebook feed, you would think that 90% of Americans only eat "humane" meat).

And, of course, we should be supporting any and all efforts to drive up the price of meat, especially chicken and eggs, as well as efforts to undercut animal products with plant-based products. The bottom line must be how many animals suffer and die, not how many people think just like us, and economics is clearly the main driver at this time.

In addition, you won't be surprised to know that I believe all advocates should be considering harm-reduction advocacy instead of ideology-driven sound-and-fury-based advocacy.

But take heart advocates, there is room for sound and fury even in the harm reduction animal advocacy suggested. Spending 8 hours leafleting with One Step for Animals booklets gives you the opportunity to vocalize thousands of times and does require some good drive fueled by anger over what animals endure in modern farming. It is not as quick and easy so going into Chipotle to have a brief tantrum, but far more likely to spare animals rather than turn people off to the plight of animals as such tantrums often do.