In the 1920s, chickens raised and killed for meat lived 112 days, growing to 2.2 pounds on optimal feed before being killed. Now, after decades of genetic manipulations, they are slaughtered after only about 45 days, at 5.5 pounds or more. So they are growing two-and-a-half times larger in only 40% of the time. Please review this report by Harish Sethu – A child raised to weigh 500 pounds by age 10? – for a graphical look at the change. 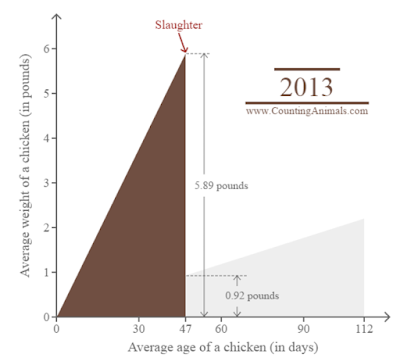 This report by Watt Poultry shows some producers with an average weight of over 8 pounds at slaughter! It is now even truer what Professor of Veterinary Medicine John Webster has said about modern industrial chicken production: “in both magnitude and severity, the single most severe, systematic example of man’s inhumanity to another sentient animal.” Combine that with this, and we may want to reevaluate our advocacy.

That we would create an inherently suffering animal as modern chickens and turkeys are for the sake of maximizing profits. Very sad.