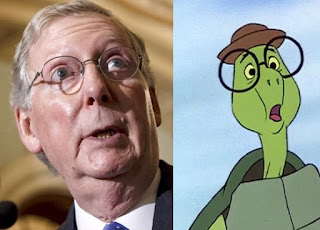 In late 2008, after Obama won the election but before his inauguration, the US and global economies were collapsing. Weekly unemployment filings were regularly setting new records, and our GDP contracted by 9% in the final quarter. We were already into the worst recession our our lifetimes, and headed toward a full-on depression.

At that time, Mitch McConnell, leader of the Senate Republicans, said that Republicans had only one goal.

To rescue the economy? To stop skyrocketing unemployment and help those who had lost their jobs?

Their only goal, as the world collapsed, was to oppose anything and everything Obama proposed, in order to make him a one-term president.

Now come this November, I will vote for whoever is the Democratic nominee, if only to prevent more Thomases and Alitos on the Supreme Court.

But now, if you want my active support running for the Dem nomination, I am a single-issue voter: You have to be living in the real world, where McConnell and other Republicans control the Senate, the House, SCOTUS, and most state houses.

Promises are irrelevant. I don't want to hear what you want, how you think things should be. Running on fantasies that have no chance of coming true in our Republican-dominated government just indicate to me that you aren't serious about really making a difference. And this is a serious time, with serious challenges, requiring serious people.

All that matters is winning and governing in the real world.

PS: What about all the great advances in society that at one point seemed "pie in the sky"? Except for that which required war, or the decision of a liberal Supreme Court, every advance has come about via the efforts of pragmatic strategists pushing forward incrementally with what was politically possible at the moment. Idealists (e.g., Nader), regardless of how "correct" their observations or proposals have been, have consistently ended up hurting the poor, minorities, and social justice in general.

PPS: More about how politics works in the real world.

PPPS: I keep being told, "We need a revolution, or nothing will change." As I've noted, a revolution isn't going to happen. But more importantly, is there anyone who really sees no difference between the Bush administration, vs the Obama administration? I understand anger when we don't get everything we want, but it seems literally insane to think there is no difference.