Our friends at The Pollination Project awarded Joe Espinosa an Unsung Vegan Hero award. Here is the write-up: 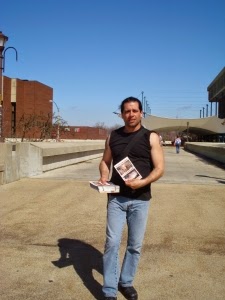 When Joe Espinosa discovered the hidden truth about farmed animals 20+ years ago, not only did he go from meat eater to vegan, he immediately became an activist.

No one has been seriously leafleting for the animals longer than Joe. Even before the formation of groups that promote leafleting, he was out in public, being a voice for the voiceless. Even with his grueling social worker job, Joe has advocated for the animals without pause, and recently hit the milestone of reaching 500,000 people by handing out vegan education booklets.

“Total dedication to the animals” seems to apply to thousands, but, at the deepest levels, is not as common as one might think.

We are social animals, of course, and almost can’t help but crave the approval of others. We want our personal beliefs validated, we want to be popular — these desires are almost irresistible. The new, the cool, the celebrated and crowd-pleasing all pull us, consciously and not. For most of us (and we admit, this has been the case for us, too), these cravings shape our advocacy, tugging us toward actions that gain the approval of other vegans, rather than what is the absolute best for reaching new people and getting them to take the first step on the journey of helping animals.

Joe has resisted the siren song of the popular, overcoming the yearning for approval. His dedication is unwavering, his vision unclouded: the animals are the bottom line, period. He is a true hero who has accomplished far more than any of us know or can adequately appreciate.