Alex Samuels: "How White Supremacy Played A Role In The Riots" 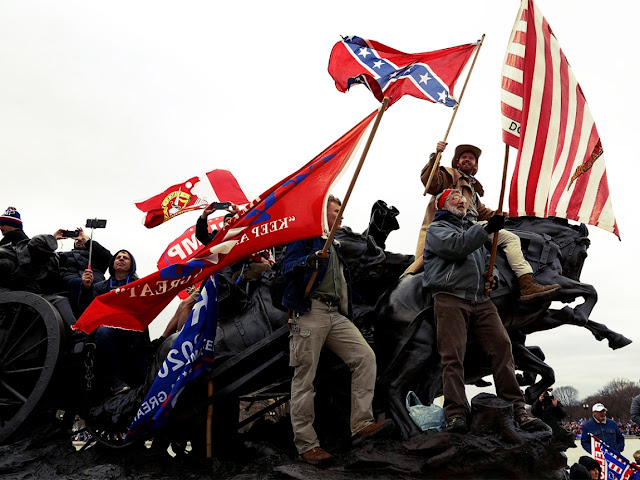 Last year, shortly after the crowds dispersed and the dust settled, there seemed to be at least one conclusion that scholars and researchers could agree on: White supremacy played a large role in the Capitol attack.

As FiveThirtyEight contributor Hakeem Jefferson wrote around then, it’s not a coincidence that the rioters were predominately white supporters of Trump. It was also no mistake that rioters employed a bevy of white nationalists symbols — like a hangman’s noose, neo-Nazi apparel and the Confederate flag. Indeed, it seems like those protesting the certification of Biden’s victory longed for a return to the days of perceived superiority and white dominance that they enjoyed under Trump.

The assault on the Capitol was in many ways a culmination of what the rioters saw as a threat facing the nation: the election of Biden and Kamala Harris, the first Black, Asian and female vice president. What’s more, that election was largely decided by voters of color who turned out in historically Republican or competitive states, like Georgia, Arizona and Pennsylvania.

A number of researchers have written about the potential consequences that can occur when white Americans believe there’s a threat to their dominant position in the social hierarchy. And it’s possible we haven’t seen the end of this; the first significant release of 2020 census data shows that the nation is diversifying faster than predicted, which could push white Americans to take more violent measures over the next few years. But what makes these potential threats even more dire is that, between the Jan. 6 insurrection and now, GOP voters have supported political violence or have expressed a willingness to condone violence.

Part of this dismissal makes sense, though, considering the right has tried to make martyrs out of those involved in political violence. This past November, for example, Kyle Rittenhouse was aquitted for killing two men during anti-racism protests in Kenosha, Wisconsin, and the verdict was largely read as a GOP victory — even by mainstream members of the right. Meanwhile, in Congress, Arizona Rep. Paul Gosar, a Republican with ties to white nationalists, faced little opposition from his colleagues after he tweeted an animated video of himself stabbing Biden and killing progressive New York Rep. Alexandria Ocasio-Cortez. Moreover, Republicans have pushed back against the House select committee investigating the Jan. 6 attack. As a result, it’s not likely that this trend of extremism and support for white supremacy among the GOP will dissipate anytime soon.