The Most Important Question

When EK was in 8th grade, a very subversive teacher asked the kids why they believed their specific religion. The teacher led them through a discussion until the kids realized that they held their beliefs because their parents had taught them.

One student, though, said, "I think Ellen would be an atheist regardless of what her parents taught her." (EK was already well known as a freethinker, but had not yet discovered that nonbinary was a nameable thing; neither had Anne or I.) "She questions everything."

The teacher had hit upon what I consider to be the most important question: Why do we believe what we believe? If we had been born in a different place (e.g., Central African Republic, Indonesia) and/or different time (e.g., 400 BCE, 536 CE), would we have believed anything close to what we believe now?

There is, of course, no way to free ourselves entirely from the biases of our upbringing (or our human nature). But I think the best way to minimize this is to regularly ask if anything we believe is not falsifiable. Is there anything we believe that we cannot imagine not believing?

This reminds me of when Bill Nye and creationist Ken Hamm shared a stage and were asked, "Is there anything that would change your mind?" Hamm answered, "No." Nye answered, "Evidence." 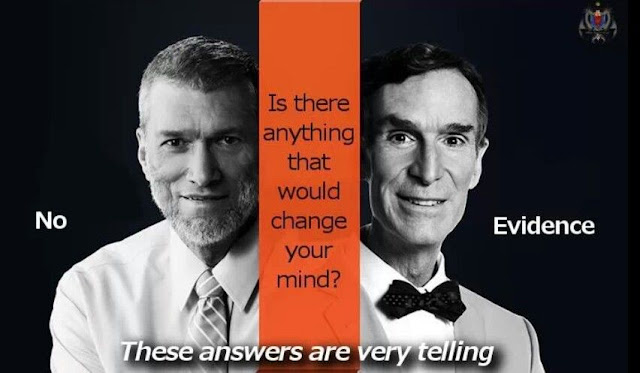 I have changed my mind what might be considered a frightening amount, but that is the topic for another day.