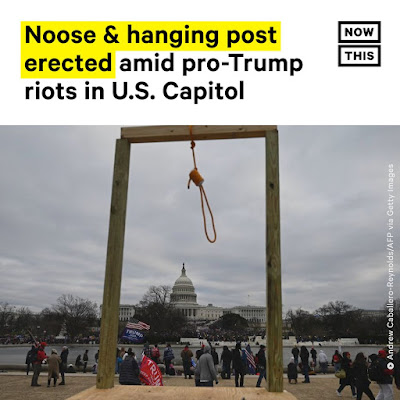 A noose and confederate flag and "Camp Auschwitz," in case they weren't being clear enough. (Update on yesterday's post.) (And, of course, Sam Harris, the least self-aware human ever, says the left and the right are equally cults, that QAnon is the same as Woke.)

“And the wildest part is these MAGA marchers think Donald Trump cares about them. He doesn’t care about you. He doesn’t care about your wife or your job or your health care or the air you breathe, the water you drink. He cares about himself. And only about himself. Unless you were pushing a lawn mower, he wouldn’t let you into his golf club. He’d roll his limo right over you to get a Chick-fil-A sandwich.” — JIMMY KIMMEL

“He does not give a damn about you. He went home to watch it on TV. You’re just entertainment for him — and, of course, a steady stream of merchandise sales.” — STEPHEN COLBERT

“Anyway, this isn’t how any of this works. We don’t decide elections on who’s most upset; we decide them by who gets the most votes, portioned by state through a weird Electoral College that was instituted to maintain the political power of slave states. It’s a long story.” — STEPHEN COLBERT