Actually, I’m angry. I’m angry at the way Trump mocked masks, how his children refused to wear them even at the debate, how they’ve held rallies and put so many at risk, how reporters for the WH are now coming down with it. It’s a pattern of callous, gross negligence. I’m angry.

If you’re mad, the best thing you can do to help is widely share my article about all the good popular stuff that’s actually in Joe Biden’s affirmative policy agenda.

Trump and Republicans held a mask-less, crowded, superspreader event at the White House in order to jam through a Supreme Court justice who may strike down the Affordable Care Act in the middle of a pandemic.

Doesn’t get more on brand than that.

The entire Republican Party is a living monument to their own mismanagement. They can’t protect the American people. They can’t even protect themselves.

They held a superspreader event. Flouted all rules, did it on camera, and the consequences are just what experts predicted. They put the executive branch and parts of the legislative branch at risk. This is a huge disaster of their own making. It’s disqualifying, to say the least

Future generations might find it hard to believe that this photo was taken at the White House in the midst of a pandemic that had by that stage killed more than 200,000 Americans. 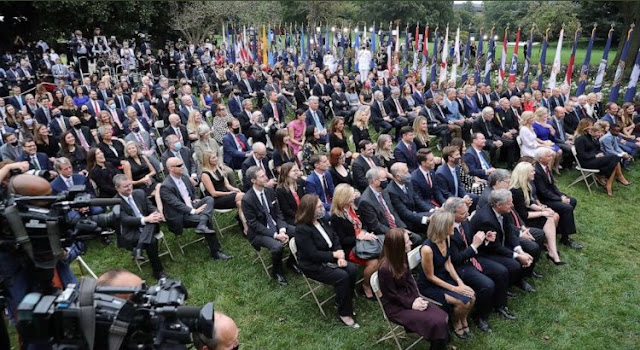 You found one another & communicate via stupefyingly advanced technologies that pivot on the discoveries of scientists.

Just thought I’d remind you of that fact.