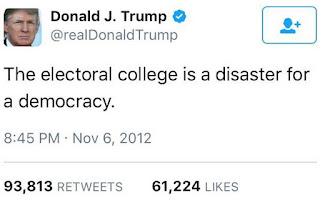 There is, of course, loads to say and much horror and grief to deal with. One quick reminder: More people voted for Hillary. In the past seven presidential elections, Democrats have gotten the most votes in six. No other party had ever done that before in the history of the U.S. Donald J Trump is absolutely right about the Electoral College.

Below is a post from my friend Reannon (shared with permission). The damage already done to this country, by validating and elevating hatred and prejudice and assault, is beyond measure. But we have to stand up. We have to.

"I've seen several of my left-leaning friends saying that they hope that Trump's presidency is a "success"; indeed, Hillary said the same thing yesterday. If by "success" you mean, "I hope he doesn't bring any more shame to our nation and the office of the President than he already has and doesn't completely jack things up," then I'm with you.

"But, I don't wish him political success. I don't wish him success in implementing any of his plans. I wish him nothing but trouble. I hope that he will continue to bleed staff and will never find his organizational footing -- just like he did during the campaign -- because he is an ineffective manager. I hope Congressional Republicans who he has insulted and demeaned for 18 months will stand in his way as much as possible. I hope that Congressional Democrats will filibuster and sit-in and protest every chance they can. I hope the ACLU sues him whenever he threatens our Constitution. I hope Americans continue to protest and push back and organize. I hope we give him nothing but heartburn and difficulty and stress.

"To hope for anything less is to want him to be successful in building a ridiculous wall that will bankrupt our nation; in deporting millions of hardworking immigrants who do the jobs that American citizens *refuse* to do and who need a path to citizenship; in implementing tired economic plans that were proven ineffective long ago; in gutting Obamacare and leaving millions of Americans without health insurance; in ignoring the dire threats of global warming; and in cultivating a culture of fear, racism, sexism, and violence against the "other." I hope he is the least successful president in the history of our republic."