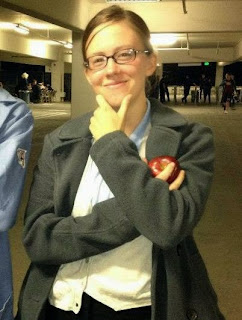 Here’s a question - raise your hand if you’ve had a bad experience with an angry vegan? [raise hand]

It’s okay. It’s happened to me too. And before that I’ve been the angry vegan more than once.

Fortunately I’m not here to rant - which is good for both of us, because I’m doing six of these and if I tried to yell each time I’m pretty sure I’d lose my voice.

So. Let’s not spend time cataloging the brutalities of factory farms. I’m sending booklets around with more information. Let’s suffice it to say that the meat industry doesn’t treat chickens and pigs the way you’d like your cats and dogs to be treated. What can you do?

One option that isn’t discussed enough is not cutting out, but instead cutting back on meat consumption, or ‘reducitarianism’. This can make a huge difference! Most of the current decline in meat consumption isn’t due to vegans and vegetarians, but the increasing number of people who are reducing their meat consumption.

Of course, the problem with reducing your meat consumption is that it’s kind of like a New Year’s resolution to exercise more or be friendlier - it’s pretty vague, and therefore it’s hard to ensure any real change. Some more concrete steps might include taking on Meatless Mondays - cutting out meat just one day a week!

Another common option is to cut out meat from one or two meals of the day, or be ‘vegetarian before 5’. If dinner is your big meal of the day, try to avoid meat for breakfast and lunch, which isn’t too hard if you’re already just having a bagel or cereal for breakfast - or skipping breakfast altogether, which you should not be doing. Even if you have an 8am class in college, keep some bagels or cereal in your dorm, do your brain a favor. Don’t try to learn organic chemistry on an empty stomach. Trust me.

Another simple step that really has the maximum doesn’t involve cutting out all meat, is just cutting out chicken.

Why chicken? This may not seem obvious, but let’s do the math. How big is a cow? A cow’s pretty big [measure it out with arms]. Like, I could feed you all lunch from a cow and we’d have leftovers for dinner - and the next day! Chickens? Chickens are pretty small. [do the arm thing again]. I could feed, what, maybe 3, 4 of you with one chicken? We’d need like, 8, 9, maybe 10 chickens to feed this whole class for a meal. All told, it takes over 200 chickens to make the same number of meals as a cow.

That’s born out by the statistics - vastly more chickens suffer for meat than any other animal. The average American eats 24.4 farm animals a year - if that you replaced all the chicken in that diet with pigs and cows, it’d be less than two. Way, way more chickens are suffering for meat.  You can check the booklets if you’re interested in the details. And - I know I promised I wouldn’t dwell on factory farm’s brutality, but let me just say that these chickens do suffer. A lot. [take a beat]

So if you’ve got Monday meals, or lunches, or formerly-chicken filled dishes that you’re trying to fill with something else, what are you going to do? You’ve already seen a lot of what you can do with something simple like beans - trust me, I’ve learned not to undervalue a good burrito. But if you’re like me, whose idea of cooking usually involves the microwave, or, at best a toaster oven - seriously, best dorm room investment I ever made, I wholeheartedly recommend it - something simpler is going to have to be on the menu.That’s where vegetarian meat’s are going to come in. 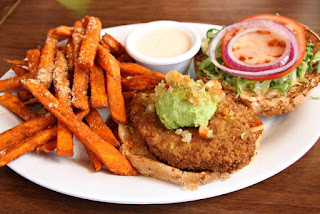 Now, not all of these veggie meats are created equal, so if you’re first reaction to the idea is “ick,” I don’t blame you. I have some non-vegetarian friends who love black bean burgers, but they’ve never been my thing, and I swear to god, if my dining hall tries to call fried tofu ‘vegan steak’ one more time. [sigh] Yeah. Believe me, I get it.

But when veggie meats are good, they’re really good. My old high school science olympiad team basically devoured Boca chicken nuggets, and my dad loves to tell the story of how a bunch of U of AZ students fell in love with the “chicken” fingers at Lovin’ Spoonfuls. These don’t have to be a pain to get your hands on or make! You can find new stuff to try in a whole lot of grocery stores - Whole Foods, Trader Joes, Bashas - and they’re spreading all the time. There are lot’s more options in these booklets. Stuff like Gardein’s ultimate beefless burgers can just be heated up in the microwave, which even I, with my nonexistent cooking skills, can manage.

So if you want to make a difference for the animals, give them a shot!

Great talk! Wish she had given that at my high school back in the day :-)