Book Review: John Thompson's "I Came As a Shadow"

For a very strange moment, Losing was one of the top basketball biographies on Amazon. At one point, I saw that Georgetown coach John Thompson's autobiography I Came As a Shadow was right by mine.

In 1981, back when I was really into basketball, I happened to see Patrick Ewing playing in his first season at Georgetown. I was immediately enamored and followed him for his four years at G'town, including the two heartbreaking losses in the NCAA championship game.

I didn't know a lot about Ewing's coach John Thompson, but he seemed like an interesting person, standing out from other coaches. (Literally -- he was 6' 10")
So I got Shadow from the library and read it. I found it fascinating to discover the backstory and unknown parts of Thompson's life. His relationship with UNC's legendary coach Dean Smith was fascinating, as well as with Nike founder Phil Knight.
I don't think anyone who doesn't like basketball and didn't follow anything about Thompson while he coached will like the book enough to read it. But I found it fascinating to learn about his experiences, especially with racism, bigotry, and discrimination. His stories about many of the players he recruited out of bad situations were informative, compelling, and often heartbreaking. I had no idea that the world only knows of the incredible Allen Iverson because of Coach Thompson.

Mostly, I found his story a useful counterweight to all the efforts to say that racism is over, affirmative action is both unnecessary and reverse discrimination, etc. I would have liked to have met Coach Thompson before he died; I'm glad he wrote this book. 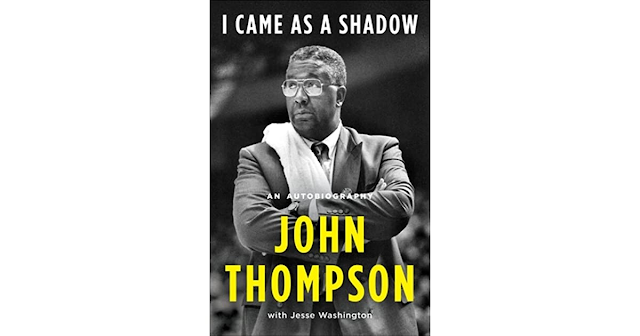