Straight Talk About the Food We Grow and Eat 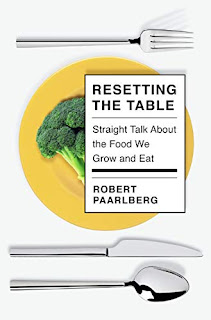 This is a most excellent book. Here is an excerpt, followed by some bits I found in reviews (apologies for transcription errors):

My research experience tells me not to yearn for an organic, local, or slow food system, since that would mean abandoning a century's worth of modern science. It would force farmers to accept more toil and less income, consumers would be given fewer nutritious food choices, and greater destruction would be done to the natural environment....

I want a food solution that works for all, including people who live on a budget and those without a lot of spare time. Dinners at Chez Panisse may be wonderful, but start at over a hundred dollars. Assembling healthy meals from fresh, unprocessed ingredients is a joy for many, but the time required for shopping, preparation, and clean up may be too much for a single parent with school-age kids....

I had seen poverty in America, mostly in cities, but the extreme rural poverty I encountered on this trip to Asia left me angered and upset, yet also motivated....

My colleagues and I who work in global food and farming can celebrate a considerable reduction in rural hunger and poverty in recent decades, especially in Asia. This progress has been sustained, in most cases, by making modern science-based farming methods available to the rural poor. This is surprisingly difficult to communicate back home, where science-based farming is routinely criticized for being too "industrial," and where a long list of nationally known food writers, journalists, and academics now promise distinctly pre-industrial alternatives....

Fertilizer use on America's farms has remained flat for the past four decades while total production was increasing more than 40%, and total insecticide use on farms is now more than 80% lower than in 1972.

With satellite positioning, drone-based sensors, big data, robotics, and now machine learning as well, a modern revolution in precision farming has made possible the production of more food by using less land, less water, less energy, and fewer chemicals, implying large benefits to the natural environment. This promising new path to environmental protection has been dubbed ecomodernism, since it works not by producing less, or returning to the past, but by using new technologies that can produce more with fewer resources.

One exciting ecomodernism project now underway is the use of molecular science to develop imitation products as substitute for meat, milk, and eggs, making it unnecessary to raise and feed so many farm animals.
And from reviews (note the one bad review is from a professor of animal science!):

-There are approximately 2,000,000 farms in the United States today, but the ones that really count in terms of food production are the 7% of US farms (150,000) which produce almost all of our food (ie. the farms which generate $500,000 or more in annual sales of crops and / or animal products).
-The pace of improvements in agricultural technology over the past century has been stunning. In 1900, nearly half the US population was required to work in agriculture in order to feed the country, mostly under very hard, primitive, and impoverished circumstances. Today, only 2% of the population work in the agricultural sector. Much of the work is still hard, but technological improvements over the years have made agriculture an incredibly more productive economic sector.
-The new technologies allow us to grow much more food per acre, while using far less water, fertilizer, pesticides, energy, and other inputs relative to outputs. Drones, robots, real-time satellite imagery and machine-learning technologies are accelerating the pace of productivity improvements even more.
Problems which need to be addressed by the food producers of the country include:
-Industrial scale animal farming is meeting with growing resistance in the larger society due to perceived cruelty and inhumane treatment of animals on a massive scale. These are not groundless charges. Perhaps the best solution in the long run will be the development of better meat substitutes or meat grown from cell cultures rather than directly from animals.
-Most farmers in the US are currently marching politically in lock-step with food manufacturing companies and lobbying groups to justify the production of the unhealthy foods which now proliferate on grocery store shelves. The author advises farmers to reverse course so that they don’t get the blame for the mounting health consequences of our current obesity epidemic, including heart disease, diabetes, and reduced life-span.
And:
In a world where half-truths and lies go around the world before the truth can get its shoes on, this book is a welcome oasis of fact-based, realistic descriptions of our food/ag problems and prescriptions for their solutions. The author does a good job of demonstrating how increasing sustainability means embracing 21st century agriculture, not regressing to 19th century agriculture. Such an embrace means producing more food with a lower footprint on the planet, wildlife, and farm animals.
I especially appreciated how though the author affirms many technologies embraced by so-called "big ag" (biotech crops, synthetic fertilizer, etc.), he doesn't withhold criticism where he thinks it's due (the routinely cruel treatment of farm animals, for example). His support for creating meat experiences without animals, via plant protein and cellular agriculture, was also refreshing.
I found myself nodding in agreement and vigorously taking notes throughout the book since there's so much in there I hope to remember. I highly recommend this book.