Chiropractic and my recent adventure in pain

I think I have about as hard-core a scientific mindset as anyone (as always, I could be wrong). Here are my experiences.

I've had back problems basically my entire life. I have scoliosis (unnatural curvature of the spine) in both planes (front / back, left / right) and developed degenerative osteoporosis over time. My dad spent over a week in traction in his 50s before having back surgery later in life. His dad had back surgery as well.

Before we met, Anne was in a bicycle accident that left her very mangled. Two trips to a chiropractor "cured" her such that she was soon running and biking again.

I have seen many chiropractors since we met in 1992, but none seemed to really help. (One seemed to make things worse.) It wasn't until we moved north of Pittsburgh that I found a chiropractor -- Dr. Scott Caruso -- who made things better.

For example: one time, my low back went "out." I was in great pain, and before Dr. Caruso, expected to be for probably 10-14 days. But after two adjustments in two days, I was back to normal and able to do a long drive.

The two chiropractors I've been happy with here in Tucson are both gone, and the others I tried were ... not helpful.

After a lot of lifting on August 15, my low back went out when bending over the next day. The next week, my primary care doc gave me a shot of cortisone, which has helped before. (For several years, I've also received somewhat regular epidural shots in my cervical vertebrae.) But that didn't help.

Then one morning, my back had locked up such that any initial movement was torture. At some moments until I forced through it, the sharp physical pain reached a vision-constricting ten. The op-iods I'm taking for my neuropathic hand pain did nothing to even take the edge off.

This somewhat forced my hand. I looked at reviews chiropractors on the Cigna website (and elsewhere) until I found Dr. Gary Mendez at Momentum Chiropractic. I saw him the last day of August, and I'd say the "locked up" torture was 30% better the next night. I saw him two days later and have not any episodes since.

My back is still "out" (sharply painful if I move in certain ways), but holy chicken am I happy to no longer fear laying down.

I'm not making any claims about chiropractic other than how a few chiropractors I've found have helped my back pain. Dr. Mendez's adjustments have not impacted my hand pain at all. I certainly have had Crohn's disease attacks and various other health issues while seeing a chiropractor. And I know two people whose backs have had problems that even chiropractors knew needed surgical intervention.

I hope none of you ever have back problems such that you need to find a chiropractor.

PS: I don't have stories like the above for this, but I do think my inversion table has made my life better than it would have been otherwise. 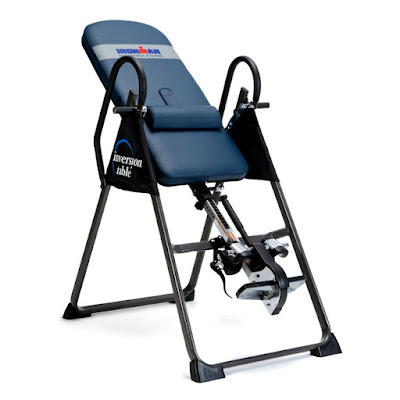