Good Quote from Matt Yglesias on Poverty, Climate, and Problems

"During this post-1990 period, we’ve seen an incredible reduction in the share of people living in extreme global poverty. If Asia had stayed poor, that would have conveniently averted the climate change problem. But it would have been worse all things considered. 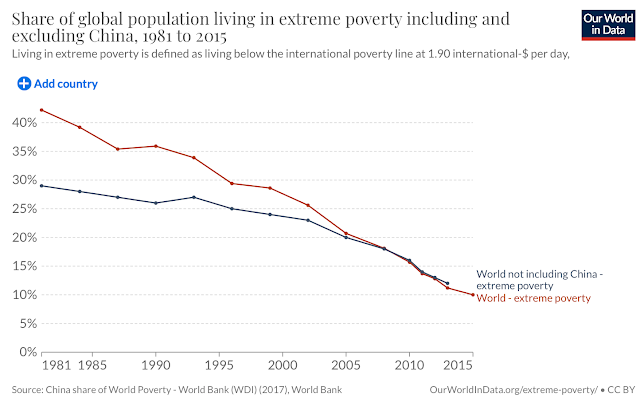 "That’s not to say that climate change is good. We should have had more aggressive mitigation efforts for the past 20-30 years, starting with pricing but including land use reforms and industrial policy and much larger R&D investments. We should have sunk a couple trillion into grid upgrades, wind farms, EV charging, and mass transit rather than into invading Iraq. Every day that passes with it easier to get a permit to drill for oil and gas on federal land than to drill for geothermal power is a day of insanity. Every physicist working at a hedge fund rather than on next-generation batteries or modular nuclear reactors is a tragedy. We should do tomorrow what we should have done yesterday.

"But we are still fundamentally looking at a world that is better than the world of 1990, not worse. The point isn’t that there isn’t a serious problem here, but that there is no historically unique crisis. Deep poverty in Asia didn’t weigh on the psyches of western intellectuals in 1990 the way climate change does today because of status quo bias and parochialism. But the world has always had very serious problems, and there’s nothing uniquely serious about today’s issues, grave though they may be."