From EK re: voting (part of a broader conversation with peers)

Under the current system, doing anything but voting for your most preferred/least dispreferred option of the two candidates most likely to get the most votes is a betrayal of your rational civic duty. I think we’re all rational enough to agree that the two candidates that are going to get the most votes are Biden and Trump. One of them - or, in the event of a catastrophe, their VP - will be sworn in in January 2021. If anything else happens, there has likely been some sort of unprecedented societal collapse and we’ll have bigger problems than who we voted for. That’s not a ‘false choice’, that’s accepting reality. If it’s your rational, considered belief that something other than one of those two options is feasible come January 2021; you’re entitled to that belief. But I doubt you truly believe that.

Your vote is not an endorsement. Your vote is not a prom proposal. Your vote is a political action. Voting is one of the ways we have gotten, in this country -- after many many years of fighting for that right to be expanded -- to move our society in a less bad direction. And after you cast your vote, you are free to use every other method of political action to try and get whoever’s in office - even and especially if it is the person you voted for - to keep moving society in a better direction - to enact policies you believe in, to change our voting system, to get rid of the electoral college, to get money out of politics, whatever you see fit.

I think it matters tremendously which of those two options ends up in the White House, and I think a Biden administration will lead to less suffering. I could tell you all the reasons I believe that, but I won’t patronize you -- you can all see the news and see what the Trump Administration does and fights for. You can read Biden’s positions on his website and look at what he did as Vice President.

I’m just going to tell you two things. One because it hasn’t gotten a lot of press: The Trump administration recently pushed a rule through HHS that would tell medical providers that they could refuse medical care to transgender people like me (or any LGBTQ people) if they felt it violated their conscience. I’ve been sitting every day since the rule came down terrified that if I get sick, someone’s going to decide it’s better not to spend the resources to save me because I’m trans. That in two years, three years, I’m going to get in a car accident and someone’s going to look at me and watch me bleed out and laugh - something that has happened to actual, real, non-theoretical trans people. The fact that people are already suing to block this rule is the one thing that makes me less afraid, and the more time the Trump administration has to pack the courts with people who don’t believe in my human rights, the less safe I am. And I’m a white, middle-class trans person with financial security and a supportive family. I’m about as safe as it gets as a trans person in this country. There are many more people like me who are less safe and will be less safe after four more years of this administration. 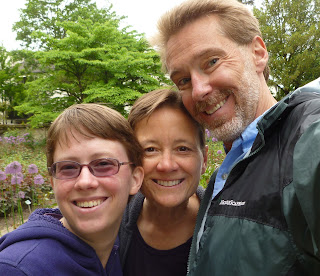 And I’m going to tell you this because it’s personal and so you wouldn’t know from the news: In November of 2016, my family had long conversations on the phone about how to ensure my parents, both of whom have preexisting conditions, and especially my father, whose life was already saved by the ACA - his words, not mine - were going to ensure that they stayed on employer healthcare when the new administration and the new Congress got rid of the ACA. When McCain voted no on the ACA repeal, I nearly wept on the phone to his office thanking him. This administration is still fighting to kill the ACA and I’m absolutely terrified that four more years will mean it dies and the protections for preexisting conditions - the protections for my mom and dad - will die with it. There are many many vastly more vulnerable people than us.

I’m sorry I don’t have anything smart to say about corrupt systems or institutions or anything like that. This isn’t theoretical for me and I simply don’t have the luxury of treating it like a debate club. This is the lives and safety of me, many more people like me, of my family, many people like us, and many many others who are less safe under Trump because of their gender or orientation or skin color or national origin. If filling in a bubble on a piece of paper seems too hard of a thing to do to help try and make us a little more likely to survive - I can’t stop you from thinking it’s too hard for you. If you’d rather follow the example of the many, many people who in 2016, in 2000, could have chosen to use their vote to put someone different in the White House, but really truly believed in their hearts that they were going to create change in a corrupt system by voting third party or not voting - I can’t stop you. The system doesn’t seem to have gotten better since 2000 to me, but I can’t stop you. I can’t make you fill in any bubble.

But I do hope that, if nothing else, ‘helping people like EK and their family have a better chance of surviving’ is a reason to at least think about swallowing some bile and moving a pen.

And if not, I do hope that whatever reasons you tell yourself for making me and my family less safe, for selling the human rights of me and everyone like me down the river, you feel good about them the next time you have to look me in the eye.