I have thought about the latest Sam Harris podcast a lot since I finished it. I hoped I would find and link to a thorough take-down of it online, but mostly I find a bunch of white people saying how "brave" and "important" it is.

So here is my summary. Sam says: You may think these videos are proof of racism. But did you know cops kill white people too? And Blacks commit [sic] more of the crime, so they can expect to get killed at higher rates. And Blacks kill lots of Blacks. Therefore, people who are protesting are in an uninformed moral panic. You know what the real problem is? Looters. And, of course, identity politics.

[If you know anyone persuaded by Harris' Fox News "statistics," this is really good: The statistical paradox of police killings. In the numbers of fatal encounters with the cops, one kind of discrimination masks another. Not that I expect anyone to be persuaded.]

I think the end really shows just how out of touch Sam is with reality. He goes on and on that he and Martin Luther King Jr. want to live in a colorblind society. Thus the problem is all these people talking about race when in reality we should just ignore it like hair color. Direct quote:

"How many blondes, brunettes, or redheads are in Harvard or police or senior management. No one is asking this question. Why? Because no one cares."

This is his prescription: that we just ignore race like we ignore white people's hair color. [Ignoring, of course, that even hair discrimination is an actual thing.]

Look, I get it: Sam really really really doesn't want to actually think about race. He wants everyone to be a privileged "rational" rich straight white dude. But parroting some Breitbart claims and citing a handful of isolated MLK quotes is actually neither courageous nor intellectually rigorous.

My only question to Sam is this: Would you want your daughters to go through life being looked at by the cops and authorities the same way a black man is?

Maybe the experience of a Black person is actually worth considering.
Just a reminder: this is the initial police report on George Floyd's death. I.e. cops murder and lie about it. Maybe some anger is appropriate? 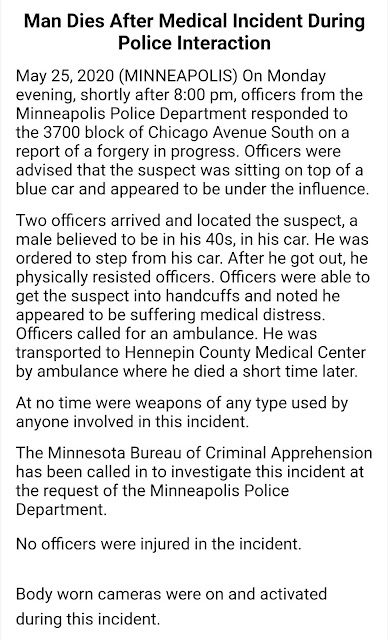