Trump to Americans: Shoot-Up with Clorox

Don't get me wrong, I loathed almost all of the policies and actions of George W Bush. But America then went on to elect the worst human alive.

"I see the disinfectant, where it knocks it out in one minute. And is there a way we can do something like that by injection inside or almost a cleaning, because you see it gets in the lungs and it does a tremendous number on the lungs."


OTOH, this is actually better than saying the virus is a "hoax." His supporters who do this probably only hurt themselves. The people who get sick, infect others, and take up limited medical resources are subsequently killing non-idiots. 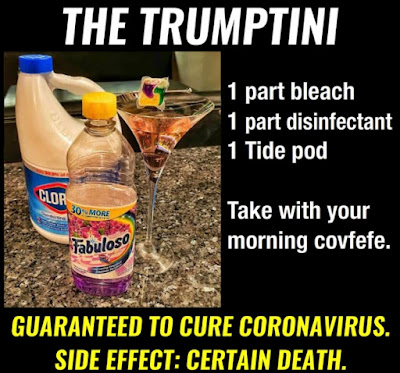 "Whaddya got to lose?"