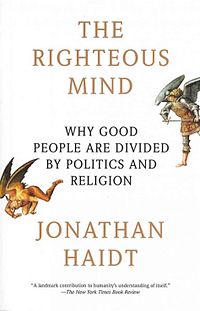 I'm re-listening to Ezra Klein's podcast with Julia Galef about rationality, having good-faith discussions, and being able to change your mind. Her argument that we should "keep our identity small" is, I think, a good one - once we are tied to a certain identity, it is hard to consider an opinion from someone on the "outside." And we often just blindly accept something said by someone with the same identity (an obvious problem within the vegan community).

There are many things about which I can imagine changing my mind: tax rates, size of government, role of religion, importance of military spending, the ethics of certain dietary choices, etc.

But the one area where I can't imagine changing my mind is that we should consider and/or treat certain people as less-than-fully-equal individuals. Sadly, prejudice and even hatred against minorities and the LGBTQ community is a bedrock for one of the major parties in the U.S.

This isn't because "some of my best friends are queer." Although I find libertarianism absurd as a political approach, I have always been a libertarian by nature. For as long as I can remember, I thought everyone should be allowed to do what they want, as long as they don't hurt anyone else and they are treating everyone else with equal respect.

I've read Jonathan Haidt's The Righteous Mind, in which he basically makes the utilitarian case for prejudice. He basically argues that separating the "in" group from "others" builds social connections and cohesion, giving individuals in the community more support and even meaning. To which I say:

Could lynching someone who is different in some way bring together and benefit the vast majority of the rest of the community? Does hatred of Mexicans (or gays, or "assertive" women) provide some people with meaning in their lives? It is theoretically possible. But this is simply not something I can imagine ever considering as an acceptable tradeoff.