To Max Boot and "Fiscal Conservatives" 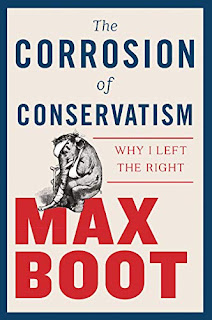 I just finished Max Boot's The Corrosion of Conservativism. I really enjoyed it except for the predictable chiding of "the left" for wanting the U.S. government to provide things that every other developed country already has (e.g., universal health care). Like that [explative] idiot Howard Schultz, whenever there is a proposal to actually help people, "reasonable" individuals feel the need to rant about how it is impossibly expensive.

Why is this criteria never applied to the right's priorities?

Ever since Reagan, there has never been a tax cut for the already rich or corporations already with record profits that the right hasn't pushed. But they never ever suggest these trillions of dollars in cuts have to be paid for. All that ever matters is giving the already rich even more money.

But in terms of priorities, consider that in just the next ~16 months, the U.S. government will spend a trillion dollars on the military. How is this making any of us any safer? How is it making the world a better place?

Spending way less on F-35s (or just about any other pork-barrel program) and more on actual foreign aid, foreign development, environmental protection / clean energy, and diplomacy would do immeasurably more for our security, freedom, and humanity's future.

Here's what I would ask of anyone who wants to label themselves a "sensible centrist." First, tell us what your priorities are and why. Then figure out how to pay for them. My priorities include freeing Americans from the horrors of the private health insurance market. We already pay more in public funds per person than most developed nations who already have universal health care. And we get far worse outcomes. I believe providing the basic right of health care to our citizens should be vastly more important than spending more than basically the rest of the world on "military might."

Boot claims to revere Eisenhower and claims to be an Eisenhower Republican. Ike warned all those decades ago:


"Every gun that is made, every warship launched, every rocket fired signifies, in the final sense, a theft from those who hunger and are not fed, those who are cold and are not clothed.

"This world in arms is not spending money alone. It is spending the sweat of its laborers, the genius of its scientists, the hopes of its children. The cost of one modern heavy bomber is this: a modern brick school in more than 30 cities. It is two electric power plants, each serving a town of 60,000 population. It is two fine, fully equipped hospitals. It is some fifty miles of concrete pavement. We pay for a single fighter with a half-million bushels of wheat. We pay for a single destroyer with new homes that could have housed more than 8,000 people. . . . This is not a way of life at all, in any true sense. Under the cloud of threatening war, it is humanity hanging from a cross of iron."

It would be great if Boot, and others, recognized this is far, far truer today.

Regardless, Max, please note that it has only ever been Democrats like Clinton and Obama who have cut the deficit, and Reagan, W, Ryan, and Trump have only exploded it.