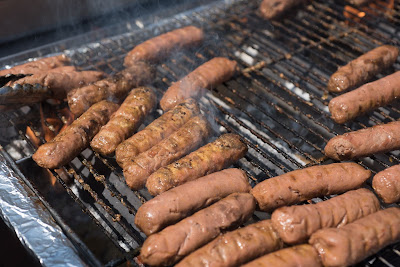 Every year, a majority of US-consumers tell pollsters they plan to eat less meat. In reply to an Oklahoma State poll, 47% said they wanted slaughterhouses to be banned. Large majorities always say they intend to eat healthfully, and many say they take the environment into account when making purchases.

How does this translate to the real world?

This year in the United States, per-capita consumption of meat will break all previous records. The same is true globally.

Let's be clear about what this means. This year, despite what people say, despite decades of pro-veg advocacy, not only will more animals suffer than ever before, but more animals will suffer per person.

The hard truth is that people don't act as they say they will act. As a general rule, people will eat as much meat as they can afford.

Given this reality, a number of companies are working to give people the meat they are going to eat, but produced without slaughter.

Yet hardly a day goes by when I don't see a vegan attacking these companies or products. Some attack because they don't like "meat" and they only want people to pursue their particular diet for their particular reasons.

However, there are also vegans who go after products from Impossible Foods, Beyond Meat, and others for their fat content, their sodium content, or something else that is "sub-optimal."

As I hope is clear, "optimal" is not only irrelevant, it is actively harmful. Holding plant-based meats to a higher standard than meat from a slaughtered animal is the ultimate example of the perfect being the enemy of the good.

In case it isn't clear: people don't make optimal choices. If they cared about eating for optimal health, per-capita meat consumption simply wouldn't be at an all-time high! And if anyone really cared about fat or sodium or heme, there have long been better choices out there. For all intents and purposes though, no one buys those better choices. Not only is meat consumption going up and up, so is obesity.

By all means, follow your preferred diet. And feel free to encourage people to eat better and exercise more.

But can we please stop helping the current meat industry by badmouthing plant-based meat or expecting the Beyond Sausages (above) to meet our personal standards? It doesn't always have to be about us.