“25 years ago on this very evening, I attended my 3rd meeting of Students for Animal Rights at UIUC and let the group know that I had not eaten meat in 6 days, and did not think I ever could again. I realize that I am shall we say, a rather unusual person in going from an ag kid (learned dairy farming from my uncle age 6-13 and entered UIUC in the College of Ag) to dropping meat 21 days after seeing the number of suffering chickens and turkeys endure in modern farming.

“Further evidence of the peculiarity is my volunteer work in animal protection, as no other volunteer has handed out 600,000 animal protection booklets. With that in mind, and the mountain of negative data to back up the rarity of someone going from meat eater to vegetarian or vegan very rapidly, and high recidivism if they do, we (Matt, Anne, Leslie and I) established One Step for Animals in 2014.

“One Step presents a more doable ask (avoiding bird flesh, even if replaced with the same amount of pig and cow flesh would still spare 25 of the 26 farmed land animals the average person eats each year) to current meat eaters. After spending hundreds of millions of dollars over the past 20 years animal protection has failed to increase the percentage of people who are vegetarian or vegan, nor more importantly decrease the number of animals raised and killed for food. Per person animal consumption is at an all time high.

“So let's take my 25 year vegeversary to reflect on the idea of doing the same thing and expecting different results, and perhaps try something new. One Step For Animals welcomes those who are serious about sparing animals rather than celebrating the word vegan. Be one of us.” 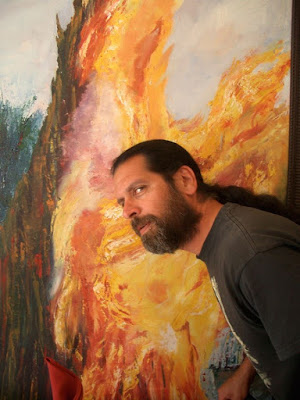