“Have you ever had a bad vegan experience?” 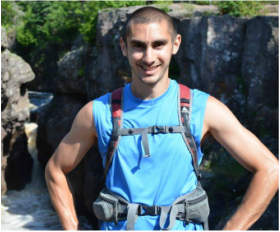 As discussed here, objective surveys of public opinion have shown “vegan” to be a severely damaged brand. (And the attacks, vitriol, and censorship I've encountered for simply pointing out these studies seems like a conscious attempt to prove the public right in their perception!)

One Step
advisor, Dan Kuzma (right), once gave me great advice for using this fact about public opinion to be able to reach new people. Dan works at Youngstown State in Ohio, and speaks before classes all the time. His insight led me to change my approach. What follows is one example of why it is important to be honest about public perception, and what we gain from reaching people where they are (please also see also this related story from 2015):

As I worked through my prepared remarks, I sensed a distinct lack of interest. Funny slides went by without even a chuckle. My questions went ignored. Many in the audience simply looked down – not to take notes, but simply because they weren’t engaged.

I knew I had to do something, so I asked:

“How many of you have had a bad vegan experience?”

To my left, the professor laughed.


Only later, after the class had ended and all the lingering students had left, did the professor tell me the class hadn’t wanted me there. When she had discussed my visit the previous week, the consensus was, “Vegans are angry. Vegans are fanatics. Vegans are unreasonable.” And “Vegans are nuts."

But by unknowingly referencing their stated dislike of vegans, I had gotten through. Having broken the ice with “bad vegan experience,” the questions came quickly. I did my best to emphasize that my only goal was to reduce suffering as much as possible. For example, I’d rather that three people ate half as many animals than have one person go vegan – as this saves more animals and each meat reducer has more potential for further change.

One of the early questions was, “Do you think all killing is wrong?” In a twist on the Socratic method, I replied, “What do you think my answer will be?”

“That all killing is wrong.”

“And what do you think?”

“Not all killing is wrong. Mercy killings, for example.”

Well, yes, I agreed. I would never keep a dog or cat alive if the rest of their life was only going to be suffering. I’ve experienced times when I’ve wanted to die; if I knew all I had to look forward to was more suffering, I’d want the option to end it.

Prompted by other questions, I agreed that not all suffering is equal, and not all “animals” have the same capacity for suffering. Fish almost certainly do not have exactly the same capacity to suffer as the great apes. Clams and oysters can’t suffer at all.

And yes, I admitted the general treatment of different species does vary. I’d much rather be reincarnated as a cow destined to be slaughtered for beef than as a chicken being raised for meat (to make it fair, one would have to be reincarnated ~250 times as a chicken – a truly hellish scenario – to provided the same amount of “meat” as a steer).

As the students realized I wasn’t there to preach at them (one told me later that they expected moralizing and scolding), but instead to have an honest exploration of the issues, the questions got deeper. For example: No, I’d rather not exist at all than be a factory farmed chicken or pig. But I don’t know if non-existence would be preferable to the life of any cow in any circumstance.

This entire time, I knew some people outside the classroom would disagree with my shades-of-grey answers. But the point isn’t to reinforce an easy, black-and-white worldview. I wasn't there to make people who already agree with me feel good about themselves.

Rather, my goal was to get these students to take animals seriously, to really consider the issues and the implications of their choices.

And they did! Over and over, someone would say, “I never thought of it that way.” “I never considered that.” “No one has ever put it like that before.” “I can see that.” They all knew – and had rejected out-of-hand – the caricature of the vegan worldview (everything all-or-nothing, all killing wrong, honey as bad as veal, etc.).

But the conversation we were having was a different ballgame. 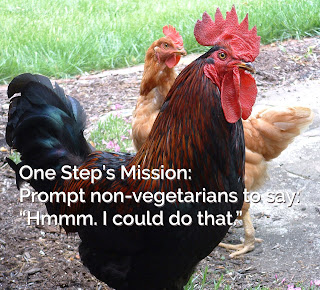 The discussion went on and on, respectful, insightful, and sincere. It went on after the class was supposed to end. No one left. Eventually, the professor stepped in, but students stayed around to ask more questions. (Since then, I’ve been contacted by many of them who had additional questions or who want to talk more.)

The class wasn’t a “vegan” experience, good or bad. It was a discussion of and for animals, the unseen individuals these students rarely (or never) considered previously. At least for these students, animals won’t be forgotten.

Another excellent piece and an all important message for all animal advocates.