A lot of people don't seem to quite get why it matters that "progressive" votes put Trump in the White House. Let's consider just one example: his refugee ban, signed on Holocaust Memorial Day.. 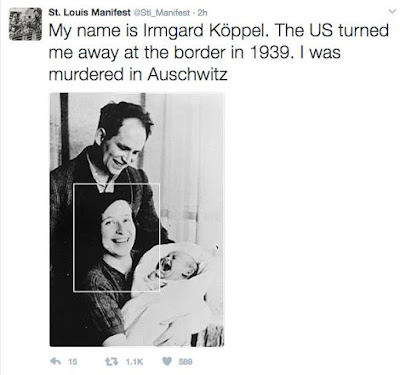 Every 5 minutes, this Twitter feed has sent out the name of a refugee turned away by the US, who was subsequently murdered in the Holocaust. We will probably never see the people who are murdered now because of the US's new policy, but their deaths are on us.


Here is another view of the people now in power:

I Was Trained for the Culture Wars in Home School, Awaiting Someone Like Mike Pence as a Messiah

"A single powerful person who is convinced of their own Rightness with no thought of introspection is dangerous. We now have a government full of them. ...They want America to succeed, but in their America there isn’t room for anyone unlike them."