“Vegan” is a distraction

In 2015, Tobias, the brains at Vegan Strategist, did an extended interview with me. I'm reproducing several questions here.


VS: How would you define a vegan? A vegan diet?
MB: Before considering this question, I think it is important to step back and consider what is actually happening in the real world. Hopefully, it could help put the focus on what really matters….
You could argue that Jane’s brothers had it better. Andy and Bruce and Gene and Martin were tossed into a bag, on top of hundreds of others. Over many agonizing minutes, they were crushed as more and more were added to the bag. With increasing panic, they struggled with all their might to move, to breathe, as their collective weight squeezed the air from their lungs. No matter how desperately they fought and gasped, they couldn’t get enough air, until finally, mercifully, they blacked out and eventually died. 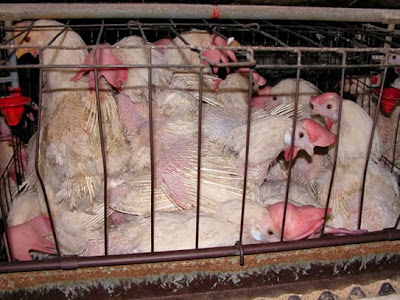 Jane’s torments were just beginning, however. Her mouth was mutilated, leaving her in so much pain she couldn’t eat for several days. One of her sisters was unable to eat and starved to death. Jane ended up stuffed into a tiny wire cage with Becky, Arlene, Megan, Tracy, and Lynn. To call it a “prison” would be a gross understatement. They were crammed into the cage so tightly that the wires rubbed their skin raw. Their excrement mixed with that of thousands of others, and the horrible ammonia stench of the piles of feces burned their nostrils and lungs.
Struggling for freedom, Megan was eventually able to reach her head through the wires. But then she was trapped, unable to get back in. Over the next few days, she slowly, painfully died of dehydration.
After over a year of this torture, Jane’s feet became tangled in the wire mesh of the floor. Unable to move, she was beginning to dehydrate. But before death could end her pain, she was torn from the cage, her entangled toes left behind, ripped from her body. The brutality of her handler crushed many of her bones, and she was thrown into a truck. For the next 14 hours, she and hundreds of others were driven through the Iowa winter, without protection, food, or water. The cold numbed the pain of Jane’s mutilated feet, but not the acute agony of her shattered bones. She was then shackled upside down, and had her throat cut. That’s how her torment ended.
An unfathomable number of individuals have suffered and are suffering just as Jane did.
Given that this is the current reality, we have a difficult choice to make:

We can spend our very limited time and resources worrying about, arguing about, and attacking each other over words and definitions.
Or we can focus our efforts entirely on actually ending the system that brutalizes individuals like Tracy and Gene.
If we take Jane’s plight seriously, the best thing most of us can do at the moment is help persuade more people to buy more cruelty-free foods. As tempting as it is, we can’t just remain in our bubble, liking and retweeting what our fellow advocates say. We can’t be distracted by online arguments. We can’t endlessly reevaluate every question and debate.
Instead, we have to focus on realistic strategies that start to create significant and lasting change with new people in the real world. As hard as it is, we absolutely must stop paying attention to people who want to create the world’s smallest club, and start paying attention to what actually creates real change with people who currently don’t know about Jane’s plight.
Questions like the above – about our definitions and opinions – seem harmless. But not only do they waste valuable time and resources, they reinforce the idea that our work is an academic exercise. It isn’t – the lives of individuals like Tracy and Andy depend on us actually doing constructive work in the real world.

VS: To what extent should we use the word “vegan” in our outreach and to what extent other words? When? What words?
I stopped eating meat, eggs, and dairy over a quarter century ago. At the time, and for years after, I was mindlessly pro-“vegan.” Not pro-animal, or pro-compassion, or pro-change. Pro-“vegan.” The word. The identity. The philosophy and “lifestyle.”

But in the real world, “vegan” is a stereotype, a punchline, an excuse. People say, “I could never be vegan,” and that is the end of the conversation – the end of any opportunity for constructive engagement, for steps taken that could have a real-world benefit for animals.
“Vegan” is an ego-boost, a divider, a distraction. It is too easy to simply judge things as “vegan / not vegan,” instead of focusing on cruelty to animals, working to end factory farms, and having any real impact in the real world.
When I focused on “vegan,” instead of how to bring about real change for animals in the real world, I was being both self-centered and lazy. I understand the desire to only care about “vegan,” of course. But at best, the word distracts from doing our best to help new people make compassionate choices that have real consequences for animals.