Helping Animals: What Do the Facts Say?

Here is the fundamental question:

Do we want fewer animals to suffer on factory farms?

It is important to decide if this is our bottom line, because the facts indicate a course of action that isn’t always in keeping with popular trends in animal advocacy.

The first and most important fact is simple numbers. The most thorough analysis (by Harish Sethu on his Counting Animals blog) shows that the average American is responsible for the factory farming and slaughter of about two dozen animals a year. Of these, more than 23 of them are birds. 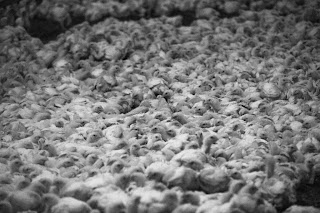 In other words, if we convince one person to replace red meat with cruelty-free foods, that person will spare less than one animal a year from factory farms and industrial slaughterhouses. 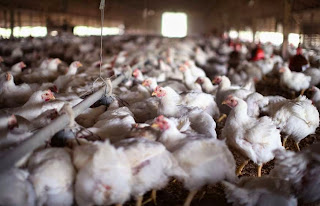 But if we convince people to stop eating birds, we nearly eliminate their support of factory farms!

Psychology in the Real World

The other vital insight is what won Herb Simon his Nobel Prize in Economics: People don’t make optimal or “perfect” decisions. Rather, almost everyone makes economic (and often even value) choices based on what is a bit “better” or “good enough.”

With regards to cruelty to animals, this plays out in several ways. In almost every sense, eating chickens is considered “better” than eating cows or pigs. For example, we might truly believe a certain diet is best for water usage. But what most people see is that chicken is now even less expensive relative to beef. Of those who actually care about water usage, the majority see chicken being much more efficient than beef.

In fact, on just about every measure, chicken is perceived as “better” -- in terms of environmental impact, in terms of global warming, and in terms of healthy eating. With our natural affinity for our fellow mammals, the cruelty chickens suffer often seems less important, too.

Given that it takes more than 200 chickens to provide the same number of meals as one cow, we simply must avoid anything that risks encouraging anyone to replace red meat with chickens. If we even slightly support someone’s move from red meat to chicken, we are risk causing much more suffering in the world.

Furthermore, basic psychology has shown that the “big ask” is far less likely to lead to any change at all, compared to a smaller ask. Relative to a complete overhaul, simply cutting back on eating chickens can seem far more achievable, and still have a huge impact.

Of course, we each think our personal diet, philosophy, lifestyle, and worldview is the correct one and the only one worth promoting.

But our personal perfection doesn’t matter. In the past quarter century, I have met many absolutely brilliant individuals, and many hard-core dedicated activists. In the end, though, it doesn’t matter how smart, consistent, or committed we are.

All that matters is how many animals are suffering. And to reduce that suffering, we have to influence more and more new people.

The bottom line is neither the words we use, nor how internally consistent our message is. The bottom line is how many new people we can help inspire to take a meaningful step that has a significant impact for animals.

In other words: It doesn’t matter what we want. It only matters what we achieve.

And to achieve as much as possible, we have to reach out to new people where they are, not shout at them from where we want them to be. We have to understand how people change. We have to make sure our message will resonate with new people as both compelling as well as achievable.

Lessons from the Real World

We’ve learned a lot in the past decades.

Even more important is that the number of animals being factory farmed and slaughtered is actually going down.

Given that reducing the number of animals suffering and dying is our stated bottom line, it is worth unpacking this good news a bit.

For decades, the number of animals killed in this country skyrocketed. Prompted to “eat healthy,” people replaced red meat with chickens. Since it takes over 200 chickens to provide the same amount of flesh as one cow, the move to “healthy eating” led directly to billions more individuals suffering. Given that chickens are much more intensively raised than cattle, the amount of suffering increased dramatically.

Since 2006, though, the number of animals killed in the US has actually decreased, even as the American population has increased. This isn’t because of a significant rise in the percentage of people adopting an entirely new diet. Rather, fewer animals are suffering and dying because of an increase in the number of people who are eating fewer animals -- meat reducers.

If we really care about animals as the bottom line, we can take away two simple lessons:

1. People choosing to eat chicken is the main driver for the brutality of factory farms and industrial slaughterhouses. Therefore, we should focus on reducing the number of chickens people eat.

2. People decreasing their meat intake can actually reduce the number of animals suffering and dying. Instead of criticizing this proven way to help animals, we should embrace, refine, and expand it.

If we follow both these guides, we will be able to have a much bigger impact in the real world.

This opinion is true, but unfortunately many people do not realize it.